Every few months, I become obsessed with a food and then I want to eat that food all the time. My recent obsession is pancakes. And since I can’t consume buttermilk on the reg, I decided I needed a healthier version.  These pancakes are healthy so you definitely won’t get that fluffy, buttery, sugary taste. Instead, you get to eat whole grains and fruit. Exciting huh? Since I’m trying to remind myself how to eat healthy again, I better learn to become obsessed with vegan gluten-free blueberry banana buckwheat pancakes. 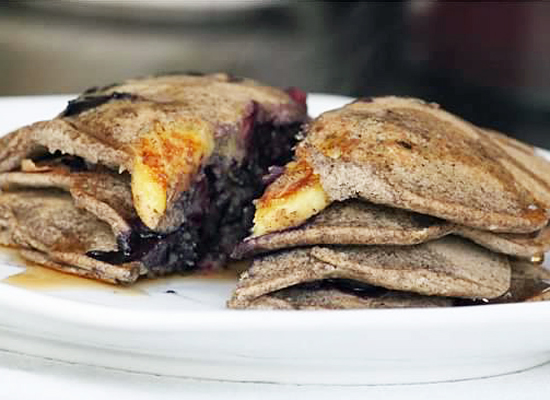 Recipe adapted from Oh She Glows

In a blender, blend the buckwheat groats on high speed until a fine flour forms. Place into a large bowl. Now whisk in the rest of the dry ingredients (rice flour, cornstarch, baking powder).

Pour in the almond milk, maple syrup, and vanilla extract. Whisk the batter until no clumps remain.

Fold in the diced banana and scraped vanilla bean. If using fresh blueberries, mix them in now.

Lightly grease skillet. Scoop 1/4 cup of batter onto the preheated skillet. If using frozen blueberries, sprinkle on a heaping tablespoon of blueberries. Cook until many bubbles appear and then flip and cook for another couple minutes. Repeat for the other pancakes.

I’m not a huge fan of eggplants, but we got a couple in our CSA box so I threw together this easy dip/spread with lots of garlic and chickpeas. I made it spicy so it appealed to my taste buds. It’s good as a leftover too. I spread it on pita, added some lettuce, tomato and cucumber and called it lunch. 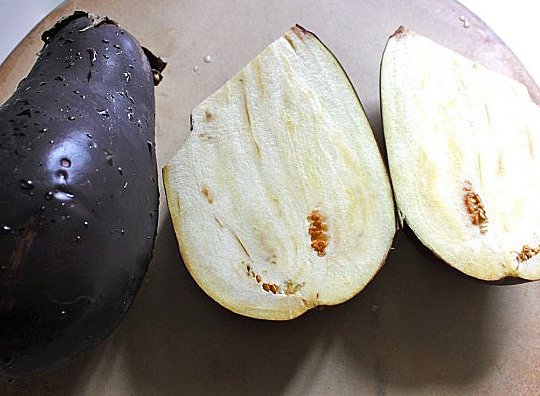 And if you haven’t already, enter the House of Harlow giveaway stat!

Labor Day makes me want to stuff my face with mayonnaise-laden starches, but this year I thought I’d stuff my face with mustard-laden vegetables like this mostly not potato salad. I adapted the recipe from Heidi Swanson’s Super Natural Every Day (my most favorite vegetarian cookbook) to include the vegetables I had in my fridge. The Dijon mustard and dill based dressing was ridiculous and the end result was delicious and — dare I say — a healthy alternative for a holiday stuff-your-face fest. 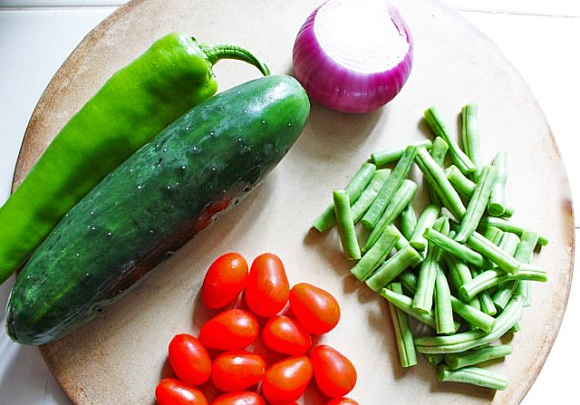 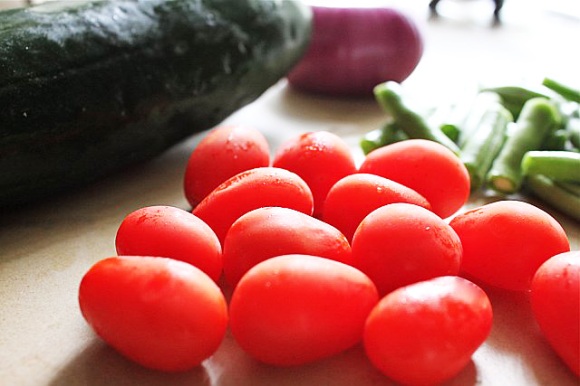 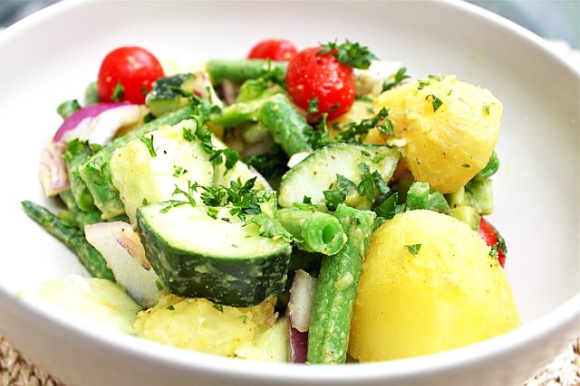 Recipe here (Note: I didn’t have tofu and I substituted several of the veggies).

Clean Out Your Fridge Couscous Recipe:

Any veggies on hand, chopped
1 can of  beans you’re in the mood for  (my fav is black or kidney)
1 tblsp olive oil
1 cup vegetable broth
1 tsp cumin
red pepper flakes (if you like spicy)
salt and pepper
handful of fresh herbs like cilantro or parsley

Saute vegetables and cumin in olive oil for about 5-7 minutes. Add couscous, beans and veggie broth. Bring to a boil, cover and simmer until most of the broth is absorbed. Season with salt and pepper, add chopped cilantro and eat up.

This is one of those recipes that I play by ear. Timing and spices all depends on the vegetables I’m using. You basically can’t go wrong with this.

Purple kale is my new favorite vegetable. It’s aesthetically pleasing and sends my taste buds aquiver. I know I risk sounding like a douche (although the word “aquiver” already qualifies me), but you guys, I can’t get enough of the surprises that come in my bi-weekly produce box from our local CSA. Purple kale, red potatoes, fresh cilantro and blood oranges! I used my culinary skills to throw together these tacos and blood orange margaritas. I didn’t use a recipe so I’ll try to remember exactly what I did in case you want to try this at home. 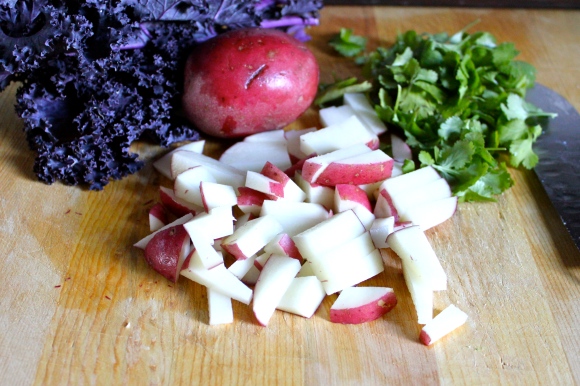 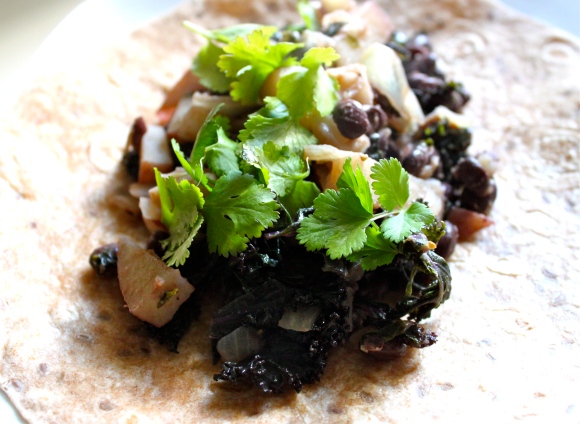 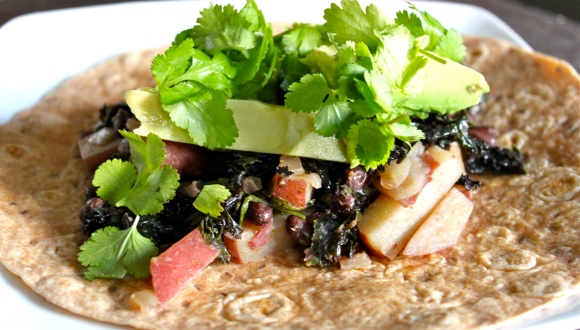 Saute the onions and potatoes in olive oil for about 15 minutes. Add a splash of water if potatoes start sticking to the pan. Add a little cumin and smoked paprika. Throw in the kale, black beans and cilantro and cook covered for about 10 minutes (until potatoes are tender). Serve on a whole grain tortilla, top with sliced avocado and cilantro and eat it.

The Husband’s reaction to my concoction — “if I had ordered this meal in a restaurant, I’d be ecstatic.” Best compliment ever right?

Tequila of your choice (we used El Agave Silver and it was delic!)
4 blood oranges
2 limes
Splash of cointreau

I don’t know bar speak, but you basically just mix everything together and serve over ice. Garnish with cilantro. Oh and don’t forget to rim the glass with salt.

Stuffing is my favorite Thanksgiving indulgence, but I’m a vegetarian and most stuffing is made with poultry broth. I was ready to forgo this treat altogether this year when I spotted a French baguette in my kitchen that the Husband and I miraculously hadn’t eaten. I foraged my fridge and came out with celery, carrots, leeks, fresh thyme, rosemary and parsley. Forty minutes later and voilà, I have a perfectly simple, yet satisfying vegetarian stuffing.

I sauteed onions, celery, carrots and leeks in about 2 tablespoons of Earth Balance butter (I’m not vegan, but I love the way it tastes and it’s so much healthier). Then I added the fresh herbs, baguette cubes and a cup of veggie broth.

Once the liquid was almost soaked, I transfered to a casserole dish, topped with bread crumbs and parmesan cheese (the Husband insisted) and baked for about 30 minutes. I was afraid the final result would be a bit bland, but the French bread and herbs make all the difference. It’s pretty divine.